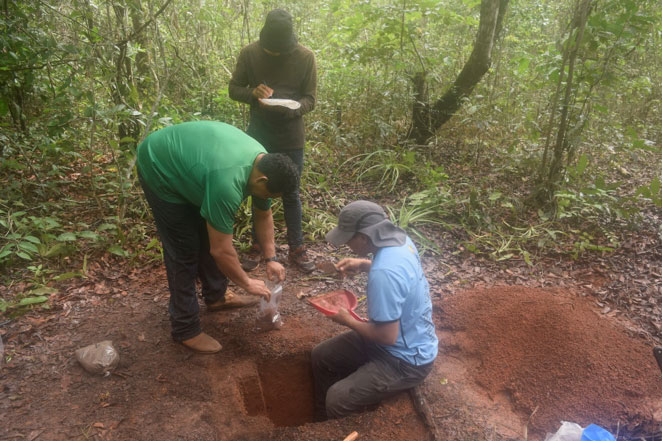 Members of an indigenous field team that is collaborating with J-WAFS-funded researchers to collect soil samples in various sites in the Amazon jungle. Photo credit: Morgan Schmidt, Department of Earth, Atmospheric and Planetary Sciences, MIT

Terra preta, or “black soil” in Portuguese, is fertile soil cultivated by indigenous peoples of the Amazon basin for agricultural purposes. “Terra preta is a perfect topic to encourage multidisciplinary research,” explained Morgan Schmidt, postdoctoral researcher in the Department of Earth, Atmospheric, and Planetary Sciences. “It's relevant for climate change, sustainable agriculture, biodiversity, tropical forests, and indigenous knowledge and cultural preservation.” Schmidt is an anthropologist and geologist who studies terra preta soils in the Amazon. His work forms part of a two-year research project funded by a seed grant from the Abdul Latif Jameel Water and Food Systems Lab (J-WAFS) in 2018 that seeks to understand the formation of this anthropogenic and highly fertile soil that sustained expansive communities across ancient Amazonian civilizations.

Terra preta sites in the Brazilian Amazon were created by pre-Columbian societies between 500 and 8,700 years ago. Most tropical rainforest soil is nutrient-poor and unsuitable for intensive agriculture, but terra preta, which is found scattered throughout the Brazilian Amazon region, is so fertile that it can still be farmed today. Growing interest among scientific researchers worldwide focuses on this soil type as a possible means of carbon sequestration and an alternative to environmentally destructive slash-and-burn agricultural techniques. Various researchers are attempting to reproduce terra preta in order to encourage sustainable tropical agriculture. At MIT, an interdisciplinary research team led by Taylor Perron, professor of geology in the Department of Earth, Atmospheric, and Planetary Sciences, and Heather Nan Lechtman and Dorothy Hosler, both professors of materials science and archaeology, is developing a predictive model to locate unknown sites. Using this and other strategies, they are also investigating the landscape formation processes that created terra preta and examining the properties of carbon particles present in this type of soil. Their goals are to help inform future carbon storage and tropical agriculture efforts and support the preservation of community agricultural practices.

This research project began with a conversation among the three professors. “We were thinking about projects at the intersection of archaeology and landscapes,” explained Perron, “and we were also very interested in environment, water, and agriculture.” Their areas of expertise—ancient materials science, archaeology, and landscape geology—made the terra preta research a natural fit. A 2018 J-WAFS seed grant catalyzed the project and provided funding to support work by Sam Goldberg, a graduate student under Perron, and Morgan Schmidt, a postdoctoral researcher.

Since the project’s inception in November 2018, the team has developed a predictive model of archaeological sites, using artificial intelligence (AI) models of satellite imagery and topographic data that illustrate the movement of ancient rivers in the area, along with soil samples collected for analysis. Through Schmidt’s connections with other archaeologists in Brazil, the researchers have access to a comprehensive database of terra preta-containing archaeological sites in the Amazon; however, the data contain “a lot of spatial bias based on where people have been,” explains Goldberg. Their predictive model seeks to reduce this bias. Goldberg and Schmidt used satellite images of existing archaeological sites to teach the artificial intelligence model what typical sites look like, and are testing different artificial intelligence models to select the one that works best. The team has collected initial soil samples for processing at a Brazilian paleoecology laboratory. In addition, Goldberg’s topographical analysis will predict how ancient river deposits created flat bluffs above the floodplain suitable for cultivating terra preta.

The next phase of research includes improving the soil location predictive model, continuing the river formation analysis, and collecting additional soil samples. In summer of 2019, the research team returned to Brazil to conduct additional fieldwork. The team tested the accuracy of the predictive model, a process known as ground-truthing, in the Upper Xingu region of Brazil. They also collected additional terra preta samples to be analyzed at MIT’s Center for Materials Research in Archaeology and Ethnology (CMRAE), with which Professors Hosler and Lechtman are affiliated. The team additionally collected samples of river deposits to further illustrate how ancient rivers shaped the geographic conditions that influenced terra preta creation.

“A project like this would be impossible to do without international collaboration,” notes Perron. Schmidt has studied terra preta in Brazil for twenty years, and he brings his extensive network of collaborators to the project. In fact, the team selected their three geographic areas of study partly due to prior connections with archaeologists currently working in those regions. “It’s easier working with people who already have projects going,” Schmidt explained. The team is also collaborating with local soil scientists and archaeologists, such as Embrapa Soils in Rio de Janeiro, to assist with terra preta analysis.

Respecting terra preta’s cultural significance is a foremost interest of the research team. “Indigenous people created this kind of soil” and still do so today, according to Schmidt. His previous archaeological work that focused on understanding how indigenous peoples create terra preta will help raise awareness of the fertile soil as a product of local knowledge. The research team is working with local, indigenous peoples, such as the Kuikuro people, to ground their research process in respect and responsiveness to these communities. Members of the Kuikuro community are assisting with data collection in the Upper Xingu region. “One of my goals,” explains Schmidt, “is to help local communities, including indigenous people, map their cultural heritage. This project really gives me a chance to pursue that.”

The project team has also gained research insight through conversations with other MIT researchers. Professors Perron and Lechtman met with Professor David Des Marais, in the department of civil and environmental engineering, through a J-WAFS-facilitated discussion session. Des Marais and a postdoctoral researcher informed the team about plant-soil interactions and how they could use in-situ measurements of leaves and their light-reflecting properties to determine differences in soils, says Perron. The team also spoke to Dara Entekhabi, whose research areas include remote sensing and hydrology.

The J-WAFS seed grant was essential to the project’s formation. According to Perron, “we may not have been able to do this at all” without the J-WAFS seed grant. “Because this is such a cross-disciplinary project… and because it's something we haven't worked on before, those two things can make it very difficult to get funding for the early stages of any project.”

Perron hopes that this research project will form the basis “for a larger project where we would continue to do research on the intersection of river processes, soils, and the human past” across larger regions of the Amazon. “I hope that this research will call attention to terra preta, and the importance of preserving the ecosystems, the forest, and the indigenous people who live there,” explains Schmidt. By furthering scientific understanding of terra preta’s geographic extent and carbon sequestration potential, the team’s research will help inform how this soil could help combat climate change and call attention to the contributions of indigenous peoples. As issues of deforestation, climate change, and the rights of indigenous peoples grow increasingly relevant, expanding our knowledge of terra preta can provide the foundation for building solutions to these complex challenges.